1AGRICULTURE AND AGRI-FOOD CLUSTERS IN CANADA

The Canadian agriculture and agri-food sector plays an important role in the Canadian economy and cannot be ignored when we investigate innovation opportunities. The combination of continued population growth, climate change and changing demands from the marketplace make this economic sector rich with possibilities.21 The agriculture and agri-food sector generated $103.5 billion in 2012, which accounted for 6.7 per cent of GDP. Overall, an estimated half of all primary production in the Canadian agriculture and agri-food sector is sold for export, making Canada the world’s fifth-largest exporter.22 Canada is a world leader when it comes to agriculture, as it has nearly 70 million hectares of farmland and seven per cent of the world’s renewable fresh water resources. Even as the consolidation of farms continues, Canada’s average farm size is now larger than the U.S.’s and Brazil’s. Farming has become steadily more capital intensive.23

The Cluster Atlas identifies nineteen separate geographic agricultural clusters across Canada; only the construction industry, at 22, has more clusters across the country.24 Nearly half of the country’s agricultural clusters are found in Ontario, with Brantford, Centre Wellington, Chatham-Kent, Guelph, Kawartha Lakes, Kitchener-Waterloo, Leamington, Norfolk and St. Catharines-Niagara all cited as having active agriculture clusters, with Kitchener-Waterloo’s being the largest with 9,449 people employed in 2011. The remaining clusters are equally split between Quebec (Drummondville, Granby, Saint-Hyacinthe, Saint-Jean-sur-Richelieu and Victoriaville) and Western Canada (Abbotsford-Mission, Brandon, Chilliwack, Lethbridge and Saskatoon).

The food and beverage processing portion of the agri-food sector is the country’s largest manufacturing sector by employment, with more than 245,000 people employed in it in 2013. In 2013, capital investments in this sector rose seven per cent to $1.8 billion.25 The Cluster Atlas identifies fifteen distinct food and beverage clusters across Canada, with two in Eastern Canada (Moncton and St. John’s), four in Quebec (Granby, Montreal, Saint-Hyacinthe and Saint-Jean-sur-Richelieu), six in Ontario (Belleville, Brantford, Hamilton, Kitchener-Waterloo, London and Toronto) and three in Western Canada (Abbotsford-Mission, Lethbridge and Vancouver). The Atlas breaks down the food and beverage processing industry into twelve sub-industries, as shown below. 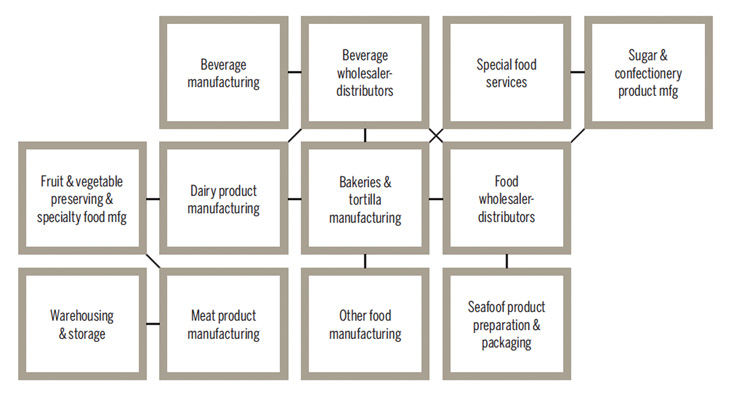 2Innovation in the Agri-food Industry

The June 2014 Senate report on agriculture noted the importance of innovation in the agriculture and agri-food sector in Canada: “Despite Canada’s wealth of arable land and water, Canadian farmers today can produce more food with fewer resources. This productivity is made possible by the discovery and adoption of research-driven new technologies and processes.”26

3Past Studies of Agri-food Innovation

We are not the first researchers to examine the state of innovation in Canada’s Agriculture and Agri-food sector. Past Canadian examinations include:

Standing Senate Committee on Agriculture and Forestry (2014): This committee investigated the state of research and innovation in the Canadian agriculture and agri-food sector. They called for an emphasis on both quality agri-food products and product differentiation. While they note the successful role of the government in creating an environment that encourages innovation in Canada, they highlight several areas of concern. First, they note that the government needs to strengthen and improve the regulatory framework within Canada to strengthen the approval process for new products, modernize animal health and disease control regulations, bolster IP protection and harmonize regulations at an international level. Second, they call for the government to adopt a long-term vision with government support for research and innovation work. Third, they call for an increase in partnerships and collaboration within the industry and an elimination of barriers at both the national and international levels in relation to innovation partnerships. Fourth, they call for the professional development of workers in agriculture and agri-food sectors to allow these workers and the public to take full advantage of innovation opportunities.

Agriculture and Agri-food Canada (2015): The report discusses the current trends and emerging opportunities for innovation available to the food processing industry. The piece highlights changes in consumer preferences due to shifting demographics, environmental concerns, a desire for more information and a need for convenience foods. It then discusses the resulting opportunities for innovation, including the use of innovative ingredients, and emerging technologies, including food processing and preservation technologies and technologies related to food quality and safety. The piece ends by calling for further research and analysis of the opportunities.

Ashton, Richards and Woods (2015): Innovation in food processing companies is examined in this report. It uses three cases to investigate the type of innovations occurring in these firms, the involvement in the innovation throughout the supply chain, the length of time for the innovation to be realized and the nature of growth that resulted from the innovation. They found that all three companies investigated had seven or more innovations in various states of completion. These innovations were primarily product innovations and process innovations. All three companies used supply chain partners outside of their companies to aid in the development of their innovations. The innovations were divided, almost equally, between being short and intense and long and continuous. Six types of growth were identified in these three cases, including growth as an increasing share of the existing market or expanding the size of the market, growth as remaining competitive or increasing efficiency and growth as creating new companies or increasing employment.

Canadian Agri-Food Policy Institute (2011): This report starts with the premise that “Canada is not realizing the full potential of a major strategic asset – the country’s agri-food sector.” It calls for a united approach throughout the country with short-term goals strategically created to meet the long-term goal of becoming “the world’s leading producer of nutritious and safe foods produced in a sustainable, profitable manner.” They call for a systems-based approach in which all agri-food stakeholders work together. They propose a five-part solution including a centre for good food citizenship, food system smart innovation, food system risk management, leadership in sustainability, and enabling regulatory change.

4What Our Roundtable Told Us

The day after our Kitchener technology industry roundtable, we headed northeast on Highway 7 to Guelph, Ont., where we met some of Canada’s leading experts in the agriculture and agri-food industry. Here is what they told us:

Efficacy requirements: The need, in some cases, to prove not just the safety of a product but its efficacy was seen by some at the roundtable as a barrier to innovation. One roundtable participant described the barriers created by efficacy requirements: “In some cases, Ontario agri-technology start-ups are launching their products in the United States instead of Canada since it is faster and the markets are bigger. These companies are enjoying millions in sales and Canadian farmers do not have access to the technology, even though Canadian taxpayers helped fund the innovations through various grants and loans over several years. We could solve this problem by harmonizing regulations with the U.S.A. and realizing we are too small to demand sovereignty in everything. There is no evidence to suggest the U.S. regulatory system is vastly inferior to ours. As was mentioned by others today, our onerous efficacy requirement is parental in nature and means that commercializing these innovations can take about three years longer in Canada. We have already harmonized important areas like human and environmental safety. Getting rid of the efficacy requirement does not seem to be too much to ask.”

Regulatory coherence: Roundtable participants discussed the incredible complexity of the agriculture and agri-food regulatory environment and said how difficult it can be for small- and medium-sized companies to navigate. They felt that agri-food manufacturers have a particularly difficult time navigating the system, because they have feet in both the agricultural and industrial worlds. One roundtable participant gave an anecdote of an agri-food manufacturer looking for government assistance to commercialize a potentially breakthrough innovation. “We don’t deal with manufacturing, you need to talk to industry,” they were told by agriculture regulators. Industry regulators offered a similar response, saying, “We don’t deal with agriculture.”

Regulatory mindset: A few members of our roundtable felt that to be the biggest regulatory barrier was the goal of regulators. As one participant put it, “The government needs to shift out of its parental mindset. The mindset is protectionist, slow and safe. It is problem-oriented, rather than potentialoriented. If we want to be the most trusted system in the world, then the way we create policy needs to change.”

Provincial barriers to innovation: One roundtable participant described the challenges as follows: “In one program, we are required to use a provincial body to be our agent to access funds from the federal government, so innovation becomes parochial. We must always try to force-fit innovation into an Ontario scenario. True innovation knows no borders. The vast majority of possible innovations in agriculture will serve the interests of all provinces and ideally multiple countries. If they can’t, then it is unlikely any will be of a size that matters. And yet, one of the filters we use to assess if we can take on an innovation is whether it will mainly benefit Ontario agriculture. This occurs while at the same time the federal government is encouraging us to expand nationally outside of Ontario. In other words, we are funded by federal money administered by a province and the province wants innovation to be provincially-focused while the feds wants us to expand nationally.”

Funding gaps: Funding issues, beyond provincialism, were also identified. One participant suggested that Canada should take lessons from Israel, where government programs ensure funding for companies at every single lifecycle stage and there are active supports to help innovators navigate commercialization. Another suggested that the way that funds are allocated for multi-year projects needs to be more flexible; the money is allocated equally each year in some programs, but companies typically have much greater needs in a project’s middle years than in the early and later years. On average, roundtable members supported funding models that put decision-making at the local level. Infrastructure gaps: The lack of rural access to broadband internet was seen as a hindrance to innovation for farmers and small agri-food companies: It impedes the adoption of the “internet of things” technologies, the acquisition of new techniques and methods, and access to foreign markets. One roundtable member suggested that Canada does not do enough to learn from best practices around the world.

Final thoughts: Overall, the roundtable’s consensus was that agri-food needs to be recognized as a strategic sector for the country. The global challenges of a rising world population and climate change create a world of opportunities for Canadian agriculture and agri-food companies. But Canada will only fully capitalize on its potential if we have innovative, entrepreneurial companies, embrace the changes brought on by a big data revolution and get the regulatory regime right.